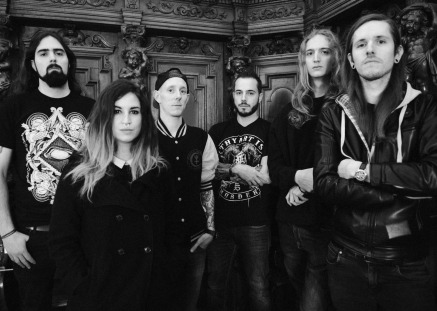 Conjonctive is a Swiss female and male fronted deathcore band born in Nyon in 2007! Their first album « Until The Whole World Dies » is released in October 2013 through Tenacity Music and allows the band to establish itself as a strong value of the Swiss music scene.

In 2014, the band won two awards during the m4music with their single « Somnambulant Cannibal » which is elected as the demo of the year and the most promising Swiss rock song of 2014.

In March 2017, Conjonctive is back with « In The Mouth Of The Devil », a dark and aggressive album which reveals the musical evolution of the band. Signed on Tenacity Music, this new record has been, as his predecessor, recorded, mixed and mastered by Vladimir Cochet at the Conatus Studios.

To this day, Conjonctive played around 100 shows and shared the stage with bands like Crowbar, Biohazard, Walls Of Jericho, Aborted, Caliban, Chelsea Grin, Veil Of Maya, Rise Of The Northstar, Benighted, Texas In July and Iwrestledabearonce.