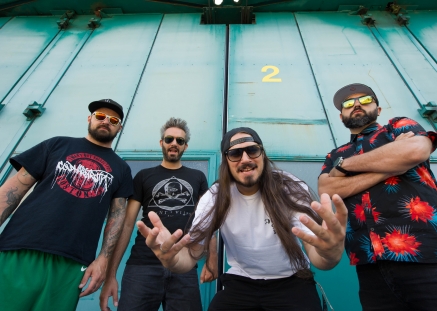 CardiaC has been training since 2000 in a style mixing rock’n’roll, hardcore, stoner and metal, with a Latin groove provided by the Spanish lyrics. The line-up is formed by Bastien C. Antony (drums), Fabien Ferraglia (bass), Julien Emery (guitar) and Ricardo Chimichanaga (ex-singer of the Spanish band “Beholder (BHR)”).

The Swiss quartet has built up its particular personality on stage and its force will go beyond frontiers. 6 albums, 2 EP’s, a lot of compilations, several times “live” on TV, dozens of officials video-clips, on tour in these countries: USA, UK, Cuba, Spain, Switzerland, France, Germany, Malta, and Italy, where they shared the stage with great bands like Limp Bizkit, Cypress Hill, Sepultura, Soilwork, Crucified Barbara, Sick of it All, Dover, Biohazard, Brujeria, Sôber, Mass Hysteria, Skizoo, Kruger, Sybreed, Jello Biafra and The G.S.M, While She Sleeps, Madball, Exodus and many more !

The international press has described the band as one of the most promising bands in extreme rock from central Europe. CardiaC has been working with some of the most talented people in the field like George Marino (METALLICA, MACHINE HEAD), Drop (SYBREED), Greg Dubuis (SAINT GERMAIN, ERIK TRUFFAZ) or talented artists like Morti (SKIZOO, EXMUNDUS), Javier (NOSTROMO) or Mariano Martín.